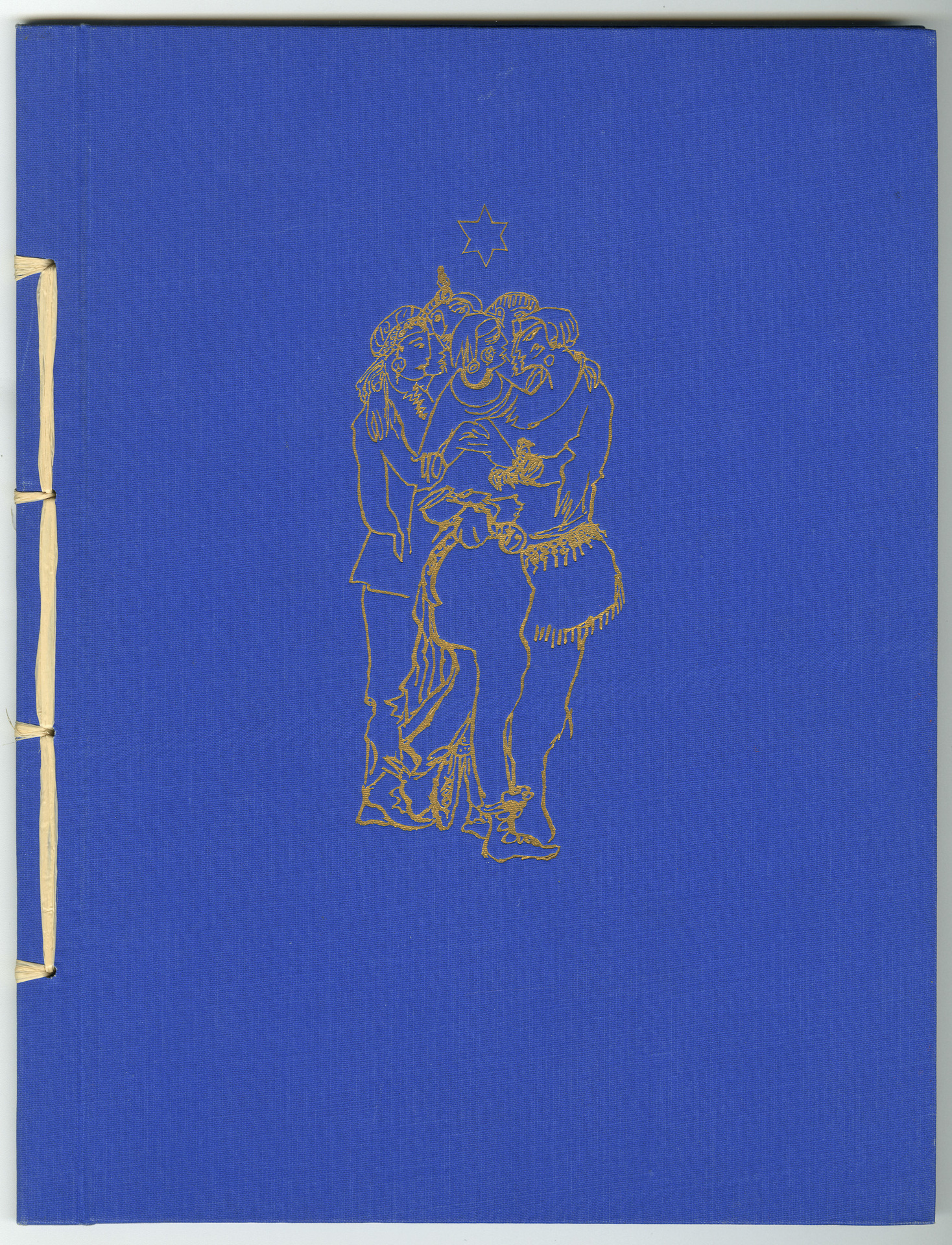 »The Bond of Wild Jews«

Five figures in colorful and luscious oriental clothes stand close together: their hands are interlaced, their bodies form a unity, their faces are almost touching. Slightly to the right is Prince Jussuf, one of Lasker-Schüler’s personas known from numerous other drawings. The central figure holds a mighty sword with an inscription in Hebrew letters. The fingers of the hand hide part of the word, but it is nevertheless legible and intact. It spells ואהבת (»Ve’ahvta«), the beginning of the central verses in Deuteronomy 6:5-9: »You shall love the Lord your God with all your heart and with all your soul and with all your might.« The drawing retains only the first word, »and you shall love«, expanding or transposing the bond of love to the intimate gathering of the five figures. Their faces are of indefinite gender, and their expressions are fierce, grave, but also tender. The group seems to conspire against an invisible enemy. The drawing’s title comments on the scene: »The Bond of Wild Jews«.

The drawing suggests a merging of Lasker-Schüler’s artist friends from her Berlin Bohemian circle, oriental princes, and Biblical figures. The »wild Jews« referred to in the title are also repeatedly mentioned in her poetry and other writings. Lasker-Schüler indeed felt closer to the ancient, untamed Jews whom she projected onto the followers of the Biblical Joseph than to the assimilated Jewish middle-class in which she had been raised. This aspect of her writings has been interpreted as the product of her fascination with the archaic and the exotic, and her detachment from reality. Looking more closely, however, one can recognize in this motif an inclination to anarchic rebellion against the repressive order of her environment and the imaginary creation of an unusual community of artists, poets, and outsiders whom she considered to be harbingers of a messianic redemption, as did many Expressionist poets during this period. The drawing illustrates her poetic reworkings of Bible stories in which she expressed her revolt against bourgeois norms and values, without, however, making a return to a traditional faith. More than mere flights from her own reality, »The Bond of Wild Jews« expresses her yearnings for intimacy and solidarity against an inimical world, a yearning that also articulates her critique of her own times.

»The Bond of Wild Jews« from Thebes. Poems and Lithographs (cover)

1 page from copy No. 88. With handwritten dedication to Kurt Horwitz. The lithograph is colored by hand and signed.