The Else Lasker-Schüler Archival Holdings in Jerusalem and Marbach: A History in Fragments

The archival collections on Else Lasker-Schüler in Jerusalem and Marbach are marked by complex histories of transmission. A wide array of donors and sellers contributed dispersed materials to both archives. Efforts to reconstruct the transmission and provenance paths of the materials through interviews, house records, related archival holdings, as well as catalogue entries of auction houses or antiquarian bookshops, provide insight into the history of the holdings in the archives of the National Library of Israel (formerly the Jewish National and University Library) (NLI) and the German Literature Archive (DLA) Marbach. Else Lasker-Schüler materials at both institutions can be found directly in her archive, yet many more original materials are kept within other estates and collections at both institutions, revealing in some cases unanticipated provenance paths and connecting eminent literary names with forgotten or exiled writers.

Else Lasker-Schüler died at the Hadassa Hospital on Mount Scopus, Jerusalem, on 22 January 1945. Upon her death, the British Mandate court appointed Sally Hirsch of the Hitachdut Olei Germania (later renamed: Hitachdut Olei Merkaz Europa, i.e. the Association of Immigrants from Central Europe) as custodian of the poet’s estate. Heinz Gerling, secretary of the association, visited the poet’s room at Mrs. Weidenfeld’s in Hama’alot Street in Jerusalem shortly after. According to his report, he found the room in a chaotic state, similar to how the poet’s friend Nehemia Cymbalist (Zuri) had described it in 1942. However, when Gerling opened the cupboard he found clothes, accessories, and bric-a-brac in immaculate order. Moreover, in a brown cardboard suitcase he found important papers, which Lasker-Schüler had kept: manuscripts, typescripts, drawings, drafts, sketches, partly in notebooks or on numerous loose sheets of paper and notes.

Original Holdings and the Wider Collection: Else Lasker-Schüler Materials at the National Library of Israel, Jerusalem

In 1951, German-Jewish poet Manfred Sturmann replaced Sally Hirsch as legal custodian of Else Lasker-Schüler’s estate in Israel and for more than three decades he proactively collected the vast amount of materials which today constitute the core of the Lasker-Schüler collection at the NLI. Sturmann had briefly met Lasker-Schüler in Berlin prior to their arrival in British Mandate Palestine during the second half of the 1930s when they became friends. Managing the poet’s estate for 34 years developed into Sturmann’s life project: he actively sought scattered paintings and drawings, dispersed manuscripts and letters by contacting family members, friends, and acquaintances in Israel and around the world. Sturmann’s own personal estate at the NLI holds some documents attesting to his travels in pursuit of these materials, although he never recorded this activity systematically. 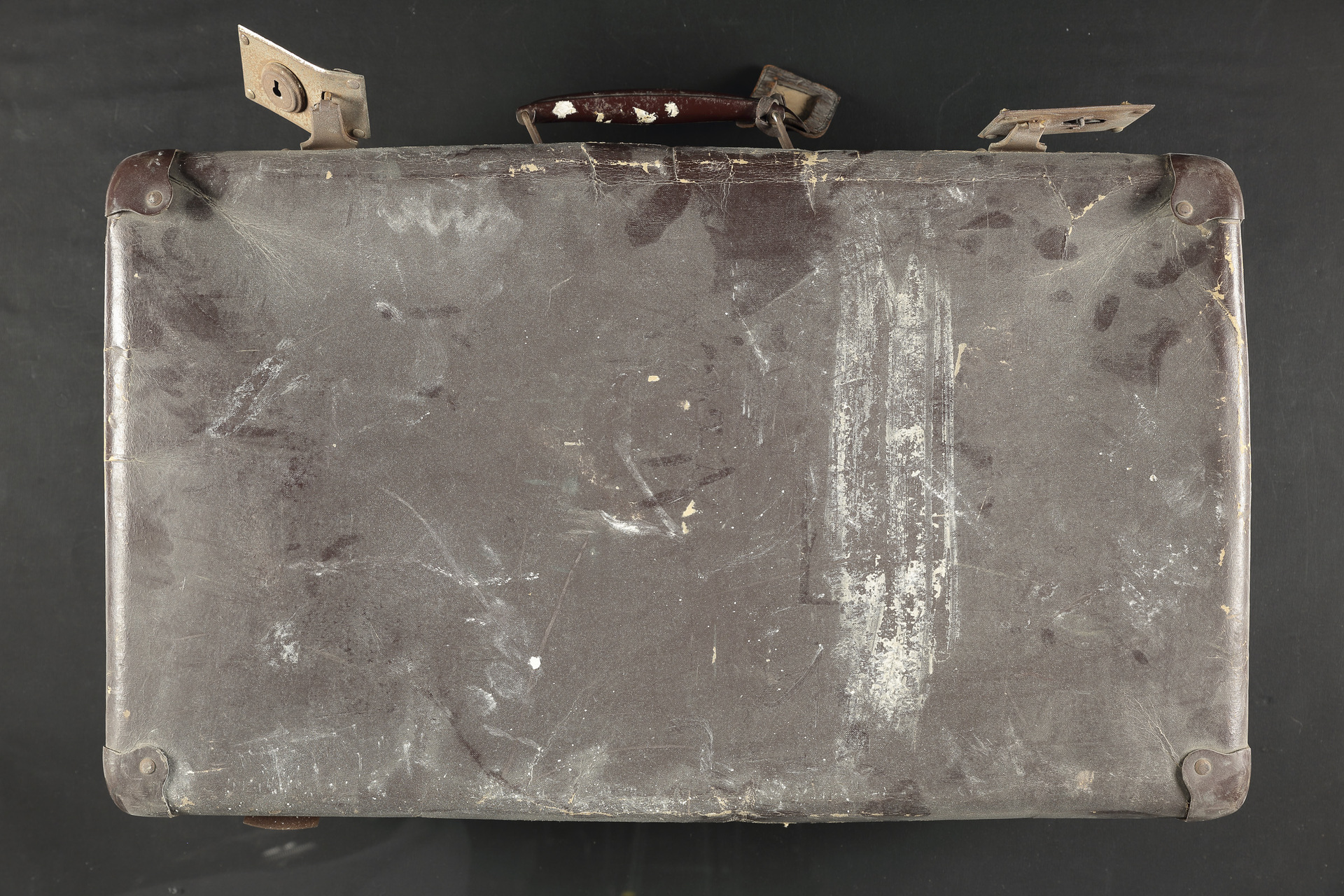 In 1974 the materials Manfred Sturmann had collected for more than three decades were moved from the offices of the Hitachdut Oley Merkas Europa to the NLI, two years after the Israeli court had ordered an inheritance ruling regarding the poet’s estate in 1972. By transferring the materials to the archive of the NLI, Sturmann sought to ensure the physical preservation and future cataloging of the materials, as well as their accessibility to a scholarly community increasingly interested in Lasker-Schüler’s works. Receipt of the materials at the NLI was recorded on 1 January 1974, although cataloging of primary sources and secondary literature was completed only in 2008. In the meantime, two further custodians were put in charge of the materials: Paul Alsberg, former director of the Israeli State Archives, and born in Elberfeld like the poet herself, acted as custodian between 1985 and 2006. In 1996, he helped to integrate into the collection a significant corpus of manuscripts found in Zurich in the house of Emil Oprecht, a key publisher of Lasker-Schüler during the 1930s. Since 2006, Rafael Weiser has been legal custodian of the materials.

As of today, 150 years after Lasker-Schuler’s birth, the Else Lasker-Schüler Collection at the NLI holds 25 meters of materials, divided into 17 series, which include manuscripts of her works, drawings, and correspondence with contemporaries such as Shmuel Yosef Agnon, Samuel Hugo Bergman, Gottfried Benn, Martin Buber, Albert Einstein, Thomas Mann, Max Reinhardt, Salman Schocken, and Akiva Ernst Simon, as well as many xerox copies of manuscripts, letters, documents, and the like preserved in archives in Europe. Evidence of Lasker-Schüler’s literary and artistic activities can be found in other personal archives and library collections, such as numerous letters to the Swiss lawyer Emil Raas, or in the papers of the Expressionist poet Albert Ehrenstein.

Gifts and Acquisitions: Provenance Trails of Else Lasker-Schüler Materials at the German Literature Archive Marbach

As of today, the Else Lasker-Schüler collection at the DLA Marbach consists of four archival containers with original manuscripts, letters and notes by the poet, and several containers with xerox copies of materials, such as letters to Martin Buber and Shmuel Hugo Bergman. Partly, these copies were given to the DLA by the NLI in order to provide access to these materials in Germany, partly they were gathered by Margarete Kupper when she prepared her editions of Lasker-Schüler’s works and letters. Moreover, letters and manuscripts by Lasker-Schüler are preserved as integral parts of other writers’ collections and estates. The original manuscripts by Lasker-Schüler include poetry (Hebrew Ballads, My Blue Piano, and various single poems like »Joseph is being sold«), prose (e.g. the essays »Karl Kraus« and »The Day of Atonement«), and numerous letters and postcards to Schalom Ben-Chorin, Adolf Loos, Franz Marc and others. 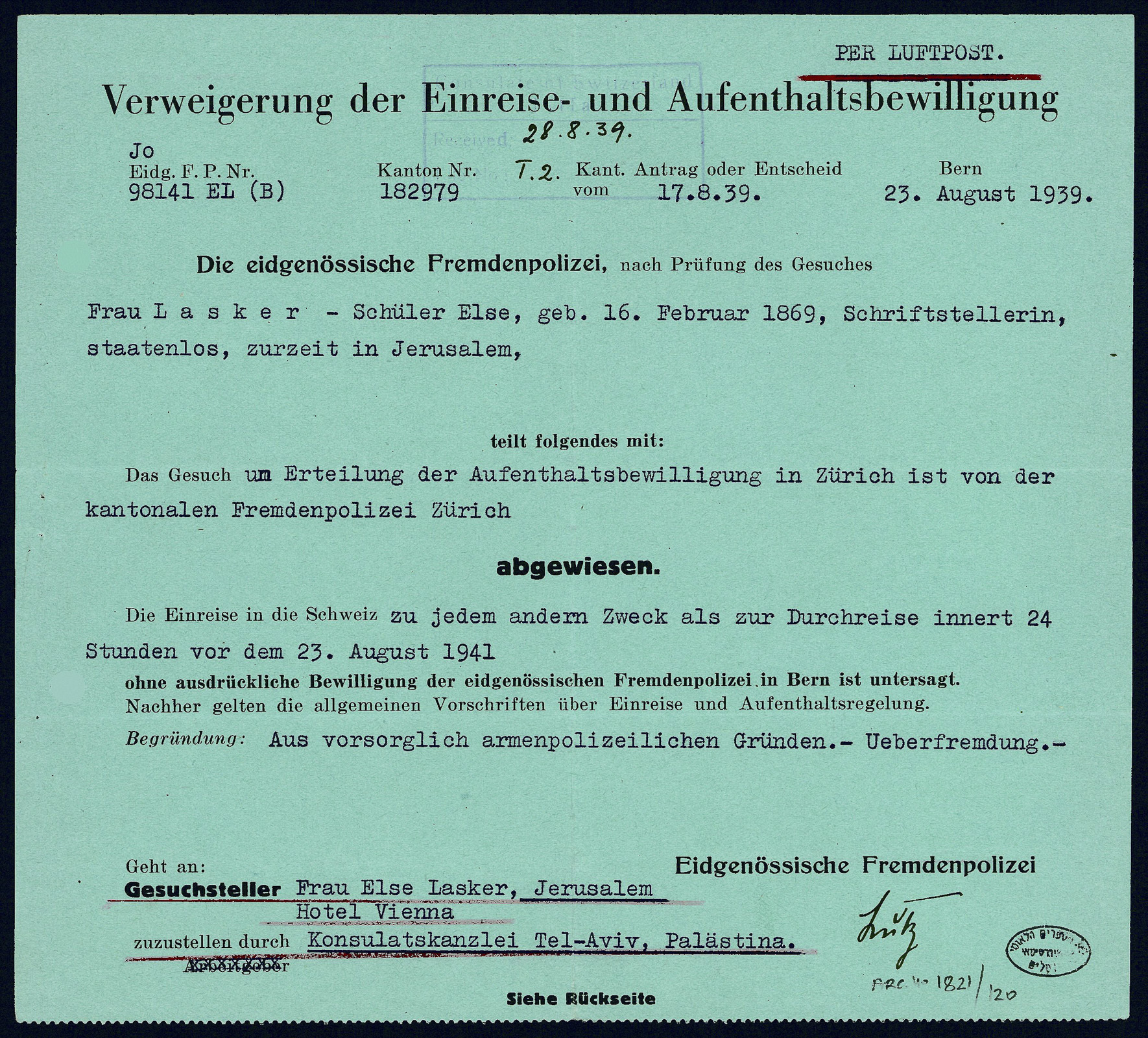 The first acquisitions of autographs by Lasker-Schüler were recorded in the 1956 accession books of the DLA, and include a letter, two postcards, and a note with a drawing, all addressed to the Berlin sculptor Georg Koch. They were purchased from the Berlin-based antiquarian Gerd Rosen in May 1956 and indicate the DLA’s endeavor to extend a collection originally based on Friedrich von Schiller and regional Swabian literature, and to collect and preserve archives and libraries of writers and scholars who were exiled during the years of the National Socialist regime and the Second World War.

The following examples may provide a glimpse into the decade-long acquisition of materials along these lines, through auctions and private donors.

The 1967 accession book of the DLA lists a purchase of materials by Lasker-Schüler, offered by Friedrich Sally Grosshut (1906-1969) of New Jersey USA. The Grosshuts had been friends of Lasker-Schüler during their years in Haifa, where they lived between 1933 and 1948 and where they opened an antiquarian bookshop and organized German-Jewish literary evenings. The materials purchased by the DLA include mainly autographs, invitations to poetry readings, postcards, and telegrams by Lasker-Schüler. A record entry prior to the purchase notes how the materials generate a »stirring image of the life of a displaced, lonely, disheartened, and sick poet, who rushed through the streets of Jerusalem, giving out invitations to Kraal lectures and reading.«

The poem »Mein Volk« (»My People«) was purchased by the DLA from the J.A. Stargardt auction house in 1979 as part of Lasker-Schüler’s poetry cycle Hebrew Ballads. The Stargardt catalogue lists »18 wonderful Hebrew Ballads by Else Lasker-Schüler« and notes the »high demand for this original poetry.« As the seller’s catalogue does not provide any provenance information, only further research could help to establish the former owners of these materials. The drawing »Asser Mëmëd Schalomein Jussuf« (1920) by Lasker-Schüler found its way into the archive via yet another route: it was received by the DLA as part of the personal estate of the writer and translator Hans Feist, which had been left to his friend Erica Mann and given to the DLA by the Mann family after Golo Mann had discovered Feist’s papers in the attic of Thomas Mann’s »Kilcherberghaus« by Lake Zurich.

This brief overview provides partly general, partly exemplary routes of transmission for some of the items shown on this virtual platform. These fragmentary provenance paths generate a story not of planned and orderly transfer by the author herself or her heirs, but rather a story of dispersal as well as literary networks in exile. It should be noted that, apart from the archives in Jerusalem and Marbach, materials by Else Lasker-Schüler are also kept at other locations, such as Hombroich, Wuppertal and Zurich.

I thank Rafael Weiser, legal custodian of the Else Lasker-Schüler estate since 2006, and Stefan Litt, curator at the Archives of the National Library for their assistance in compiling the information brought in the section on Else Lasker-Schüler’s estate at the NLI.