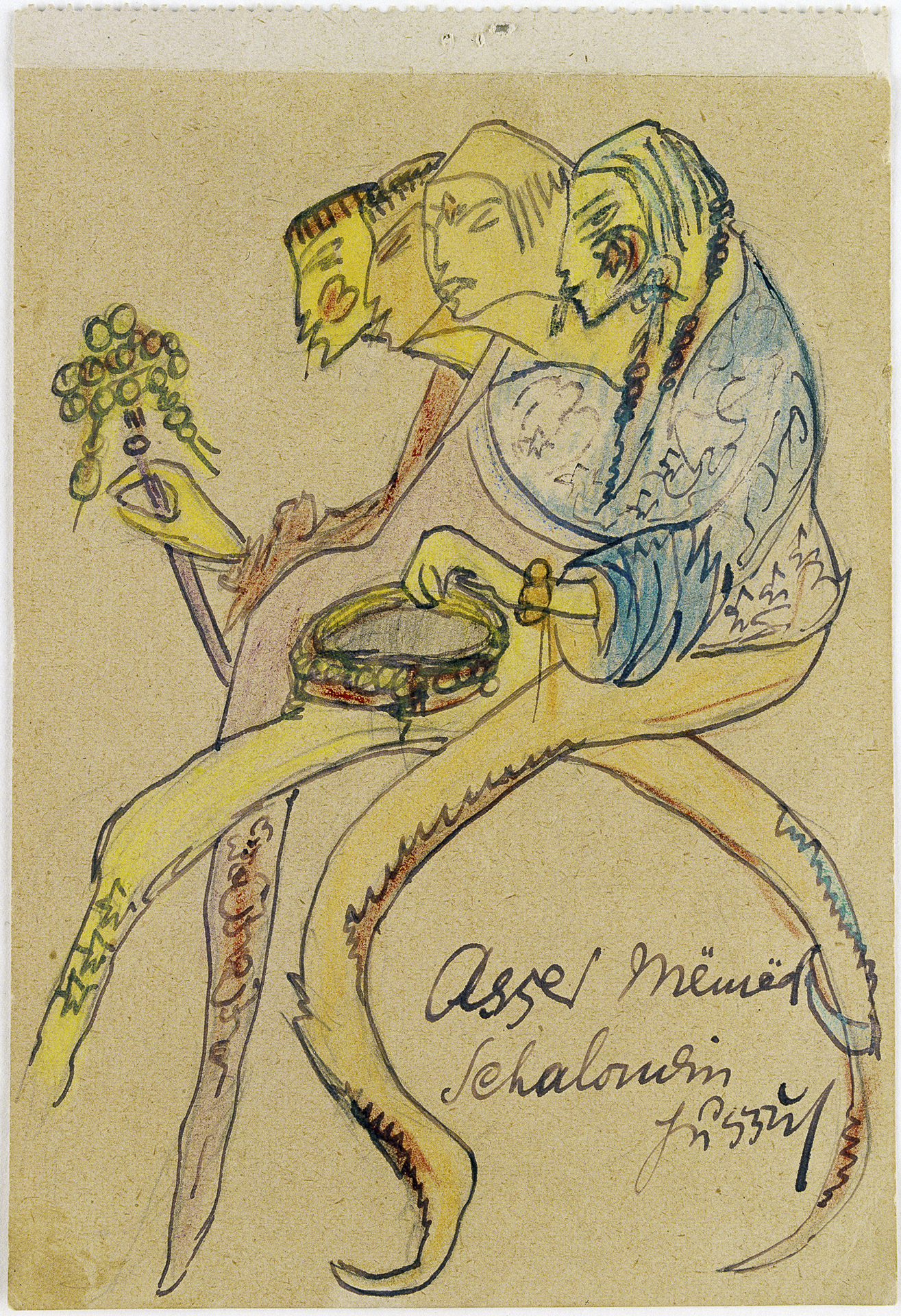 The Drawing »Asser Mëmëd Schalomein Jussuf« and The Malik. An Imperial History with Images and Drawings

Asser, Mëmëd, and Schalomein – all chiefs of one of Else Lasker-Schüler’s self-figurations, Prince Jussuf – appear in the epistolary novel Der Malik (1919) and its initial version, published as »letters and pictures« in literary journals. The chieftains and Jussuf go to war, from which the prince returns as the crowned Emperor Abigail Jussuf. The drawing, however, is not an illustration accompanying the novel, but an independent work that is a testament to the significance of the visual form in Else Lasker-Schüler’s oeuvre.

In the pen-and-ink drawing colored in with (wax) crayon, the figures are so closely intertwined that they almost form an ornament. The upper bodies and long, serpentine legs can only be distinguished by their colors. That the figures are outlined by a single contour intensifies the dynamic movement of the four dancing and music-making friends. The faces are all similar: slightly varied versions of the typical Jussuf profile, with long downward-pointing noses, slanting narrow eyes, thick eyebrows, and short straight hair, as well as stars and crescents on their cheeks that are meant to designate the figures as Muslims.

By creating emphatically oriental self-figurations, Lasker-Schüler playfully and provocatively points to the anti-Semitic stereotype of Jews as Asian foreigners who segregated themselves from German society. At the same time, the drawing signals the artist’s dissociation from the Jewish community surrounding her. For the figure of Jussuf is modeled on the biblical- Qur’anic Joseph, who was sold by his brothers to an Ishmaelite caravan on the way to Egypt and thus stands not only for being a stranger among other nations, but also for being a foreigner amid one’s own people.

Else Lasker-Schüler communicated to her audience that she disapproved of the acculturated Jews who adapted their traditional rituals and customs to the norms of the German bourgeoisie in order to free themselves from the stigma of a non-European origin. She only loved »wild Jews who grow near the holy rivers.« Wild Jews were fierce and proud, passionate and sensual. They were heroic figures from a biblical-oriental past, who were to serve as models for a future community.