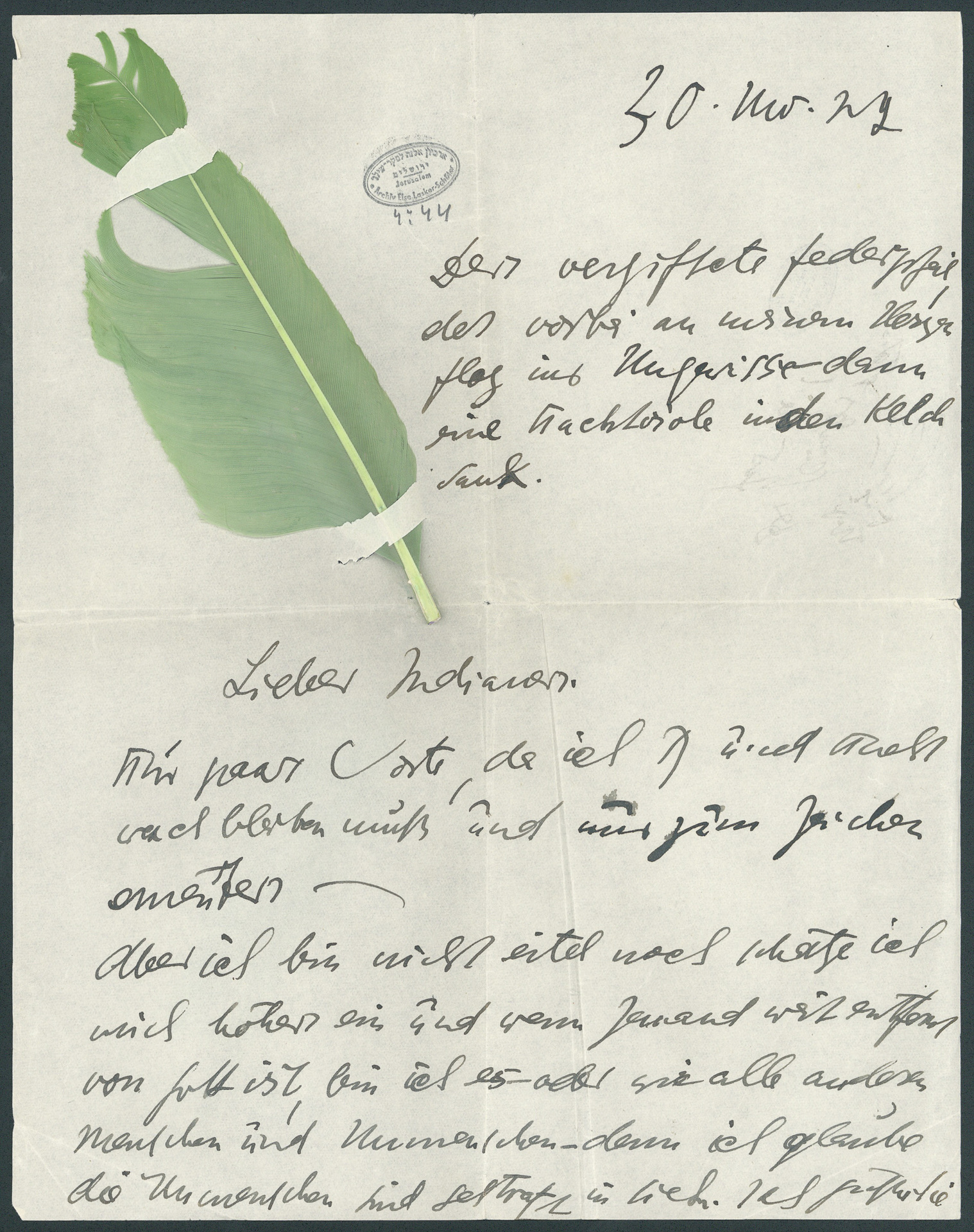 Letter from 30 November 1927 to Paul Goldscheider

On 13 April 1927, Paul Goldscheider (1902–1983) writes a cautious letter to Else Lasker-Schüler. He calls her his »Heavenly Queen«. She sends the letter back with comments written in between the lines; after »Heavenly Queen«, she writes the sentence »I am merely the most burdened person, I carry burdens daily«. Goldscheider’s admiring and empathetic words reach Lasker-Schüler during a personally difficult time, during which she feared for the life of her son who would later die of tuberculosis on 14 December 1927. An intense penfriendship between Lasker-Schüler and Goldscheider develops. As usual in her oeuvre, Lasker-Schüler blends fiction with her correspondence and in her letters to Goldscheider, she gives herself the ›Native-American‹ name »Blue Jaguar«. The alter egos and titles that Lasker-Schüler bestows on her friends and acquaintances are always metaphorically or metonymically connected to the respective person. Because of his travels to South America, Goldscheider becomes an »Incan Indian«, an »Inca«, or often simply an »Indian« (»Indianer«). In keeping with the stereotype frequent in the Western film genre, Lasker-Schüler equates the Native-American »Indian« with the »noble savage«. For her, this term encompasses everything that constitutes the sincere friendship between popular author Karl May’s characters Winnetou and Old Shatterhand: fraternal loyalty and boundless solidarity. For her, »Indian« is a title of nobility.

In the letter from 30 November 1927, Lasker-Schüler’s playful blurring of the boundaries between fiction and reality takes on a haptic dimension. A green feather is inserted into the letterhead and accompanied by the lines: »The poisoned feather arrow that flew past my heart into the unknown – then sank into the chalice of a damask violet«. In Lasker-Schüler’s writing, fictitious events may be metaphors of reality. The poisoned arrow that pierces the heart refers simultaneously to an adventure about Native Americans and to a lovesick heart or, since the arrow misses its target, to non-consummated love. The poet expresses herself in words and drawings that are rich in imagery. Alongside the feather, the »damask violet« stands for the end of a love affair for it opens its flowers at dusk and releases a sweet scent yet when it sinks into its calyx in the morning, the night of love is over. Lasker-Schüler also enriches her handwriting with images that possess symbolic meaning. On the second page of the letter she establishes »Jerusalem« as sacred by drawing a Star of David above the word. Under the star she places a heart to indicate her love for Judaism and for the city that is as yet unknown to her. Above the word David floats a halo, in honor of the poet-king who »appeared« to her in a vision »one long time« as the patron of her own occupation. These signs possess an almost magical function resembling that of a talisman, for Lasker-Schüler also draws them on personal belongings. They serve not only for interpersonal correspondence. Rather, the poets wishes to show love and reverence for things sacred.