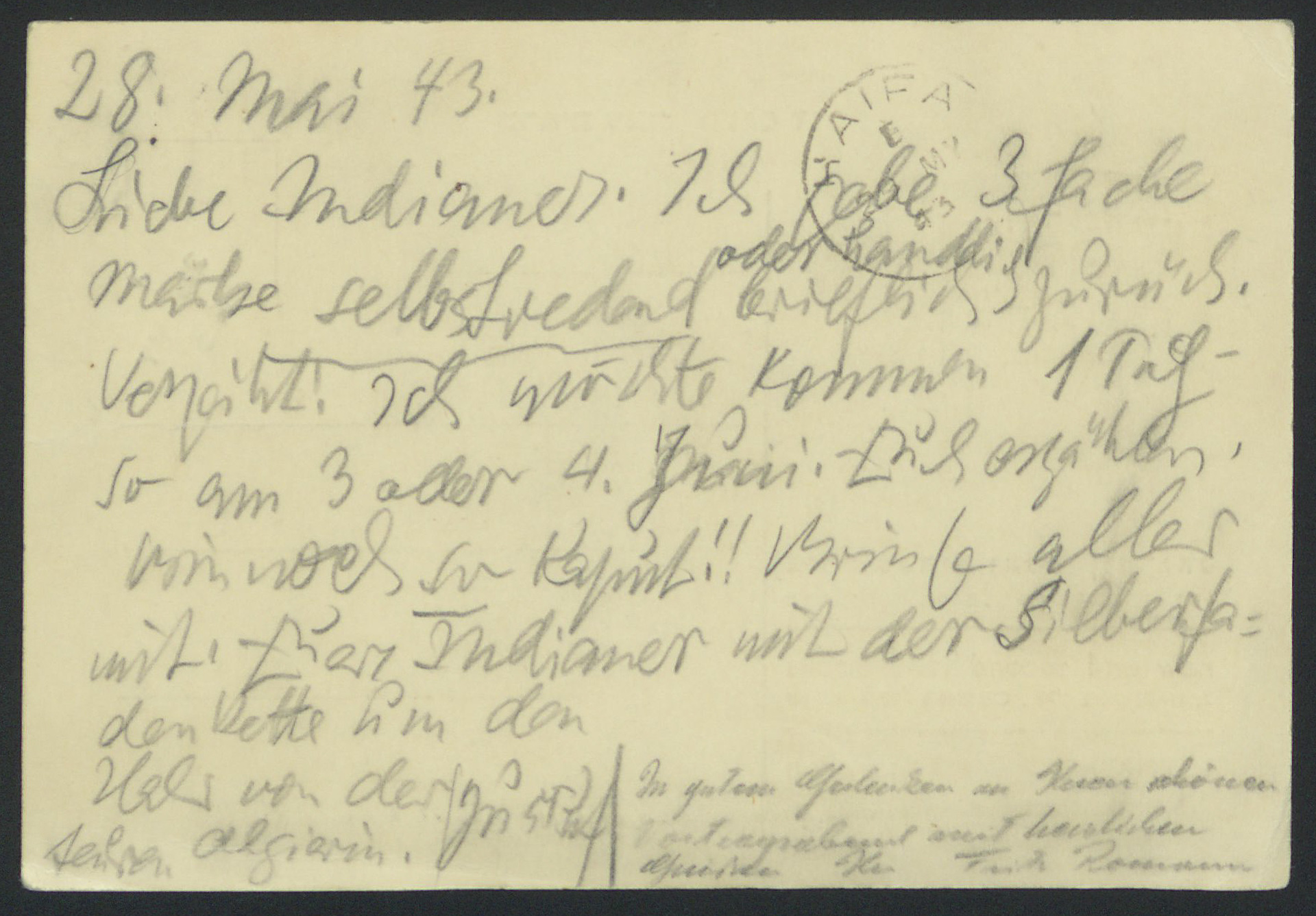 Postcard to Friedrich Sally and Sina Grosshut from 28 May 1943

This postcard dated 28 May 1943 is addressed to Friedrich Sally Grosshut (1906-1969) and his wife Sina (1904-1998), a couple who had run an antiquarian bookshop in Haifa, Herzl St. 32, since 1936, where they also organized readings on German-Jewish literature. Sally Grosshut came from Wiesbaden and was a lawyer. Together with his then fiancée Sina Rosenstrauch he emigrated to Palestine in 1933: They married in 1936 and went to Sweden in 1948, and to the United States one year later. In Palestine, later in Sweden and the USA, Sally Grosshut wrote and published journalistic works, but his stories, novels, and plays remained mostly unpublished.

Else Lasker-Schüler wrote on a postcard obtained from the Jerusalem bookshop »Heatid« (»The Future«), owned by Ulrich Salingré. Fritz Romann, who wrote a short greeting on the postcard, was in charge of the antiquarian section located on the first floor of the bookshop.

Lasker-Schüler’s request, »I would like to come for 1 day – on 3 or 4 June. To tell you a story«, refers to a reading of her play IchundIch (»I and I«); after some delays, the reading took place on 11 July 1943 in the Grosshuts’ bookshop. I and I – the author’s third play after Die Wupper (»Dark River«, 1909) and Arthur Aronymus und seine Väter (»Arthur Aronymus and his Ancestors«, 1932) – was written in Jerusalem in 1940/41 and has been preserved as a typescript in Lasker-Schüler’s Nachlass at the Jerusalem National Library. Before her reading in Haifa, Lasker-Schüler had first read I and I at the Alfred-Berger-Club in Jerusalem on 20 July 1941. She hoped to publish I and I with the support of the two Haifa textile manufacturers Hans Moller and Fritz Weisskopf. On 13 August 1943, the journalist Franz Goldstein, who lived in Jerusalem, even announced the imminent publication of the play in the New York Aufbau (Vol. 9, No. 33, p. 9). In reference to the content he writes: »In wild turmoil the figures from Faust as well as Goethe are jumbled together with the Nazi leaders Hitler, Göring, Goebbels, and Hess, while Max Reinhardt, the Ritz Brothers, the poet [Else Lasker-Schüler herself], and a critic from Jerusalem take part in the action in the style of commedia dell’arte from their vantage point in a theatre box. It is a devilish nightmare, sometimes with grotesque humor, but also with passages displaying visionary vigor and a poetic magic, a kind of surrealist Offenbach.«

I and I remained unprinted during Lasker-Schüler’s lifetime.

Else Lasker-Schüler, Three Plays. Dark River, Arthur Aronymus and his Ancestors, and I and I, translated by Jane Curtis, 2005.